​From concept to completion, every step of a project is handled by our team of engineers, architects, construction crew, and interior designers.

Each telescoping pole is made in the USA and has a 5-Year limited warranty . Our supplier has been awarded the Good Housekeeping Seal.

Gold ball comes free with 20 foot pole but we have different types of eagles, stands and even lighting for you.

US Flags are made of nylon with embroidered stars. A 3' x 5' US flag is free with 20 foot pole.

The flag when flown at half-staff, should be first hoisted to the peak for an instant and then lowered to the half-staff position. The slag should be again raised to the peak before it is lowered for the day. On Memorial Day, the flag should be displayed at half-staff until noon only, then raised to the top of the staff. By order of the President, the flag shall be flown at half-staff upon the death of principal figures of the United States Government and the Governor of the State, territory or possession, as a mark of respect to their memory. In the event of the death of other officials or foreign dignitaries, the flag is to displayed at half-staff according to Presidential instructions or orders, or in accordance with recognized customs or practices not inconsistent with law. 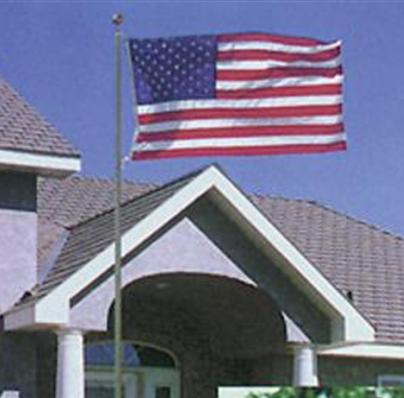 RED: STANDS FOR HARDINESS AND COURAGE

WHITE: IS THE SYMBOL OF PURITY AND INNOCENCE

BLUE: IS THE COLOR OF VIGILANCE, PERSERVERANCE  AND JUSTICE

It is the universal custom to display the flag only from sunrise to sunset on buildings and on stationary flagstaffs in the open. However, when a patriotic effect is desired, the flag may be displayed twenty-four hours a day if properly illuminated during the hours of dark.